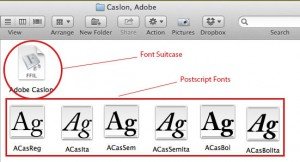 When I first started working on a Mac in the 1980s, there were 2 kinds of font formats: Postscript and TrueType. Postscript fonts were used for printing. Several resided on the printer (Palatino and Times Roman, for example), while others were downloaded to the output device automatically when you hit the “Print” button in the software program you were using. TrueType fonts were intended for viewing on the computer screen, and some were included as default typefaces on your computer (Geneva, New York, and Monaco, for example). Both democratized typography and contributed greatly to the desktop publishing revolution.

Postscript fonts are built with 2 components: the screen font suitcase that generates the type in specific sizes on the computer screen, and the printer font that is a scalable outline technology used when printing. Its format is compatible with the Postscript Page Description Language that output devices use to rasterize the printed page. The 2 components are linked: the printer font has information in it that can be sent to the operating system to create screen font sizes beyond those inside the suitcase. It is crucial that you package the  fonts with all of the other files you send to the vendor, since you shouldn’t assume that the vendor has them. Failure to do this is the number 1 prepress problem faced by printers.

TrueType fonts have only the screen font suitcase component. They are bitmapped, rather than outlined. They don’t contain as much information as a Postscript font and thus cannot generate smooth-edged type to a printed page as beautifully as Postscript fonts can. You can print with Truetype, but you may see ragged edges.

Both Postscript and TrueType are platform-specific. Mac fonts cannot be used on a Windows PC, or vice versa. It used to be difficult for designers on different platforms to collaborate because sharing files was such a challenge. If I created a magazine layout in Quark XPress and wanted feedback from someone working on a PC, I usually had to send them a print-out.

The Emergence of OpenType

The OpenType format, developed in the 1990s by Adobe and Microsoft, solved the cross-platform problem and is the current standard. A key feature is that OpenType can be used on both Mac and Windows platforms. OpenType combines Postscript and TrueType into one: a single file contains all of the outline, bitmap, and metric data needed for both screen and print use. Plus, its encoding has been enhanced:

At the heart of OpenType is Unicode, a platform-independent, international multi-byte character encoding that covers virtually all of the world’s languages. As a result, OpenType fonts make multilingual typography easier by allowing multiple language character sets in one font. All Adobe OpenType fonts include the standard range of Latin characters used throughout the western world, and several international characters, including the euro currency (€), “estimated”, and litre symbols. (— Adobe Systems)

How do you Identify the Font Format? 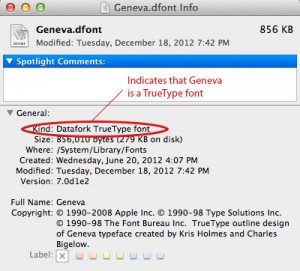 It’s a good idea to have a strategy for keeping fonts organized. You can install the fonts anytime and activate them when you need them. I use a font management utility (Suitcase Fusion) to organize my fonts by sets. You can identify the format by the name suffix and by the file icon. On a Mac, you can get more information by selecting a file icon or a folder, going to the FILE menu on the desktop, and scrolling down to “Get Info” (CMMD-I).
Here’s a table to help identify the format:

The new technologies have influenced the way I prepare packages for a print vendor somewhat. I still include all of the fonts and make sure I’m using Postscript and/or OpenType formats. If I must use TrueType, I check with the vendor to see if they will accept the font(s). Improvements in print technology have enabled some vendors to say, confidently, “yes, we’ll be able to print the TrueType accurately with no loss of quality.” If the vendor does not accept TrueType, you have other options:

What’s Next for Font Technology?

Most of this discussion has been centered on making the right font choices for print pieces. Yet, the most recent evolution of font technology has occurred on the web. We were once limited to using fonts that were native to both Mac and Windows platforms to ensure that all users could view things the same way. If you wanted more unique typography, it was necessary to create images of the text, which meant cumbersome updating of web pages. We now have more choices in the fonts we can use on the web.

Nonetheless, web typography still has obstacles. One has been browser support. Not all browsers support the CSS @font-face selector that enables embedding of fonts into stylesheets. Browser support for font formats varies. Another hurdle has been the reluctance of font foundries (the companies that manufacture fonts) to license their fonts for web use.

Thankfully, things are changing and continue to improve. Several web type services (TypeKit, Font Bureau, and FontDeck, for example) have partnered with foundries to provide the licensing infrastructure that was needed. Designers can now subscribe to these services and gain access to a nice range of fonts. Other services, like Google and Font Squirrel, developed their Font API and have a large library of open source fonts that are free for use on the web. You can find web fonts on many other sites, but the quality varies considerably, so be mindful of your selections. The future looks promising, and I look forward to further proliferation of font choices for web design.

© 2000-2022 Anne S. Katzeff. All rights reserved. Unless noted, all artwork and text are copyrighted by the artist. Images may not be reproduced, manipulated, or used in any way without Anne’s written permission.