QuarkXpress was the industry-standard and my exclusive page layout program for a long, long time. Around 2007, I began the migration from Quark to InDesign CS3. Among the many reasons for the change was the seamless integration of InDesign with the other Adobe products I use, notably Photoshop and Illustrator.

Once I made the full commitment to InDesign, I had to find a way to convert all of those Quark files. InDesign CS3 was not capable of opening QuarkXpress v5 files. A colleague told me about a nifty plug-in by Markzware, called “Q2ID“, which converts QuarkXpress to InDesign. I purchased it for $172 on MacMall.com; a quick visit to both sites today reveals that the pricing has remained remarkably steady. It is well worth the cost, as it will save you hours of work. You should be sure to purchase the version that suits your needs regarding software versions and Mac/PC platform.

The plug-in is installed in the InDesign application folder on your computer. Specifically, place it inside the Filters folder that resides inside the Plug-ins folder (Adobe InDesign > Plug-ins > Filters). Relaunch InDesign. Open the Quark file. That’s all: a very simple, clean, and accurate conversion. 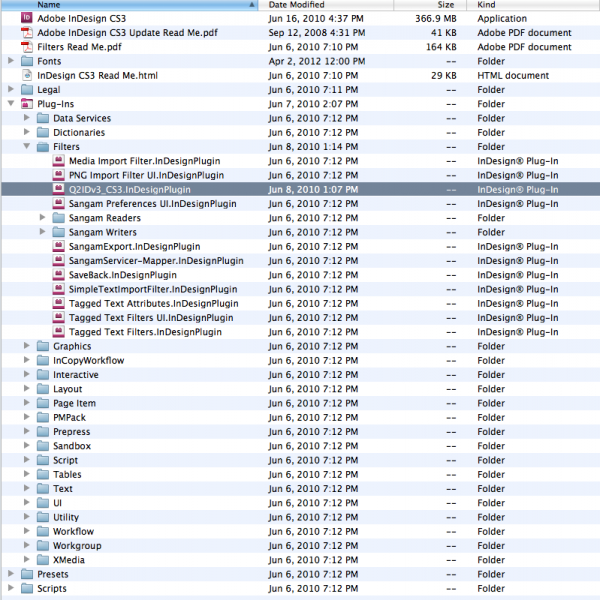 If you haven’t noticed, InDesign functions pretty much as a plug-ins manager. InDesign CS5 can convert document and template files from QuarkXPress 3.3 or 4.1x. To convert documents created with QuarkXpress 5.0 or later, Adobe suggests that you “reopen the documents in QuarkXPress and save them in 4.0 format.” Sure, that’s one solution (assuming you own QuarkXpress v5). Or you could simply purchase the Q2ID plug-in to extend InDesign’s functionality, and make your life so much easier.

My Art in a Book!

My blog post about designing the book: Self-Publishing Adventures

© 2000-2020 Anne S. Katzeff. All rights reserved. Unless noted, all artwork and text are copyrighted by the artist. Images may not be reproduced, manipulated, or used in any way without Anne’s written permission.