There is a way to “save back” an InDesign CS5 (or 5.5) file to an earlier version. But, it’s not the powerful and flexible “SAVE AS” technique that you use in Photoshop and Illustrator. Instead, you must export the InDesign file using the InDesign Markup format, or IDML. It will be saved with the same name as the CS5/5.5 file, yet with the suffix “.idml” at the end of the file name. When you open the IDML file in CS4, it becomes an “Untitled” document that you need to rename.

To export an InDesign file, go to the FILE menu and select the export feature (Cmmd-E/Cntrl-E). In the separate window that pops up, select the InDesign Markup (IDML) format, name your file, and click SAVE to complete the export. 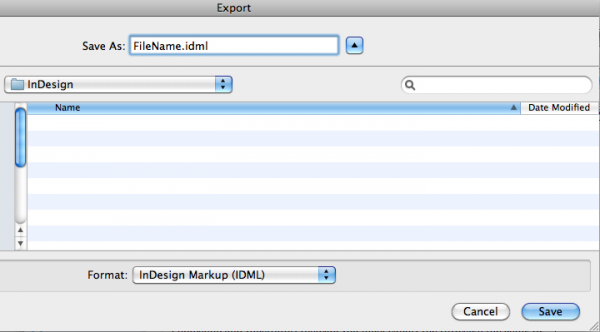 Unfortunately, you cannot open IDML files in InDesign CS3. In order to do that, you’d have to open the file in CS4 and export it as an InDesign Interchange INX file. Like IDML, this opens as an “Untitled” document that you need to rename.

If your InDesign CS5 file is acting oddly, you should export to IDML and see if that helps. IDML files do a general clean-up and remove corrupt data. It’s worth a try.

It’s nice to have a “save back” feature, but it’s pretty cumbersome, if you ask me. Adobe really needs to step it up in this area and make it a smoother, more seamless process. Instead of saving back, we should be able to simply “SAVE AS”, and choose from a drop-down menu selection of previous InDesign versions.