I’ve been inspired this year to paint at our farmers’ market in Belmont. Interestingly, it was my participation in the current art show at the Belmont Gallery of Art (“From the Garden to the Kitchen to the Table”) which planted the initial seed of inspiration. The art in this year’s show relates to all aspects of the cycles of sustainable agriculture: sowing, tending, harvesting, preparation, and distribution of food and plants.

The show is coordinated with the library’s town-wide reading program. I read the featured book, Animal, Vegetable, Miracle: A Year of Food Life by Barbara Kingsolver, and thought it was terrific. She wrote it in collaboration with her husband and daughter, describing their experiences during the year they ate locally-produced food.

Launching the town reading program will be a free talk presented by Frances Moore Lappe on Sept. 9, “Food Choices for a Small Planet”, at the Belmont Town Hall auditorium. Many years ago, I read Lappe’s book, Diet for a Small Planet, and was greatly influenced to become a vegetarian. It will be interesting to hear her speak about current issues.

All of these factors contributed to my inspiration to paint at the farmers’ market. Certain other factors had to coalesce, too, before I was able to put action into the thought. The weather (rainy and chilly for most of the spring and early summer) cleared up. The portable easel that I ordered (out of stock for days) arrived at my studio. Project deadlines were met, and finally, I made it to the farmers market a couple of weeks ago for my first painting session! I found a shady spot between the Sergi Farm stand and Karen York’s Happy Halo Whisper Cakes. It was my first time using my new easel; I quickly learned the set-up logistics, planted some postcards at the base of the easel, and set up to paint the Farm School’s rainbow chard, which had fascinated me for weeks.

My “neighbors” were very friendly and welcoming. The Sergi Farm group invited me to come to their farm (the last remaining farm in Belmont) to paint. Some shoppers were curious about what I was doing and peeked at my work. Several market organizers stopped by to visit as well. Spending the afternoon there enabled me to really tune into the energy of the market and see how wonderful a community gathering it is. Overall, it was a fabulous experience! 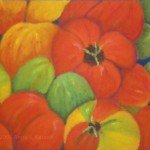 The next week, the heirloom tomatoes caught my attention, so positioned myself between Karen York (again) and the Kimball Farm stand, and painted their tomatoes. Hal Shubin, a volunteer who tweets about the market and maintains its website, took a picture of me.

At the end of the afternoon, a couple of market organizers came to chat and see my painting. Within minutes, we found ourselves talking about having an art activity at the next week’s market. They asked if I would guide children and adults in drawing whatever inspires them: veggies, fruits, bread, cakes, cheese… I happily agreed!

Next: I’ll describe the art in the market activity.

© 2000-2022 Anne S. Katzeff. All rights reserved. Unless noted, all artwork and text are copyrighted by the artist. Images may not be reproduced, manipulated, or used in any way without Anne’s written permission.